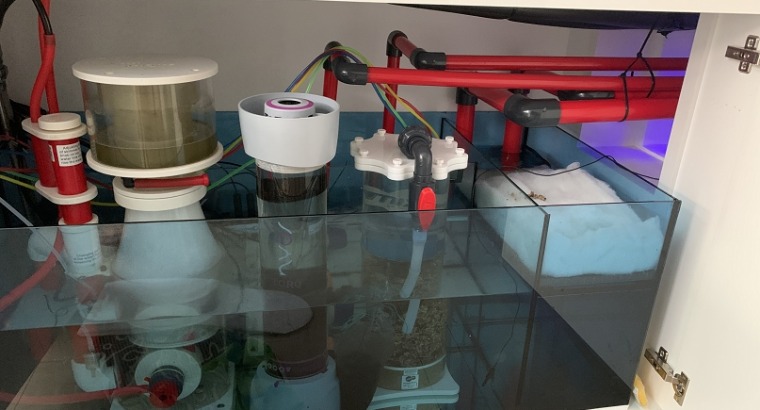 Basic equipment in a marine tank setup that you might not see in a freshwater setup.

Are you a freshwater person that is starting a reef tank and wondering about the different equipment use between a freshwater and marine tank? Today we will talk about some of the products that you might not see in a freshwater setup. (Most simplified term)

A Protein Skimmer or also known as a foam fractionator is a device commonly used to remove organic compounds such as food and waste particles from the saltwater aquarium by blinding the waste and extract it via micro bubbling foaming. However, believe not this pcs of equipment will only work in a marine tank.

How it works is that when the water pump that is inside the protein skimmer propelling the water into the skimmer and towards the output, the air from the surrounding was mix into the chamber when it goes through a diffusor causing the many fine microbubbles to form. The foam created then attracts inorganic compound from the water column and bring it to the surface by using foams into the skimmer cup. That is how it extract hydrophobic (example fats and oil) or hydrophilic (example salt, sugar, ammonia acids, and most inorganic compound) making the water cleaner and reducing water changes required.

It is commonly placed in a sump but there are both in-sump and out sump model as well as a hangover version of it that allows you to hang on any part of your tank.

A Calcium Reactor is an effective method to supplement calcium to a reef aquarium. The way it works is that through a carbon dioxide supply that supply carbon dioxide C02 into the reaction chamber that helps to melt the calcium media in the chamber in a low ph environment. The solution is then released into the tank slowly by an additional pump that propeller the tank water into the calcium reactor to fulfil the need of calcium intake in a reef tank.

A Dosing pump itself as its name suggested is an automated pump that dose liquid into your tank with a built-in timer. The reason doing so is as elements such as calcium and other elements get absorbed by the corals, we can replenish it by dosing it back through the dosing pump automatically.

Hailea chiller , a common pcs of equipment for a reef tank. ( Picture taken from https://reefmarketsg.com.sg/ )

A Chiller is an important pcs of equipment in a marine reef tank that help to maintain the temperature of the reef tank. Water enters into the input of the chiller and it is chilled before being the return to the outlet pipe. In a reef aquarium, maintaining colder water temperatures are required for a marine tank especially if you are keeping corals.

A Wavemaker is a piece of equipment that creates wave/flow or movement of water in your tank that helps simulate the wave movement in the natural ocean. It plays an important role in a reef tank, as not only it help bring waste into the filter compartment, it also helps bring food to corals and the livestock in a reef tank as corals unlike fishes are unable to move around to capture it;s own food, it rely on water movement to bring food to itself or else it will die. Wave/flow in the tank also allows air exchange on the surface of the tank which oxygenates the tank water.

Wavemaker also helps to prevent dead zone forming in your tank that promotes movement in a reef tank.

A Fluidise Reactor is a reaction chamber that allows you to place your desire media and allow controlled flow to process the filter media in it before exiting from the reaction chamber. Fluidise reactor is commonly used for chemical filtration to remove unwanted chemical in the water or to improve the water quality in the tank.

One example is using Rowaphos (Phosphate absorber media) to remove phosphate from the water that passes through it. Water needs to be pass-through slowly and fluidise for Rowaphos to be more effective.

This sums up some of the common items that we use in marine and probably that you wouldn’t see in a typical freshwater setup. Feel free to discuss and share about your view on the discussion thread HERE.

Starting your first marine tank. Overview to plan your equipment and budget (Part 1)

Water clarity in a reef tank

How to keep your aquarium cool during an Emergency ?

Are you ready to start a Marine Tank?