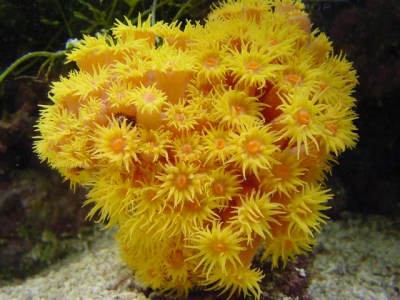 The Sun coral In the reef

The Sun in the Reef

I want to show you some of the absolutely amazing creatures that can be found in the world of marine aquariums! To begin with, I will talk about my most recent acquisition, the Tubastrea faulkneri, otherwise known as the Orange Sun Coral.

The Orange Sun Coral is grouped into the Large Polyp Stony corals (LPS) under the Family: Dendrophyliidae, Genus: Tubastrea, Species: faulkneri. The name Tubastrea, comes from the Latin words for tube (tubus) and star (astron), and this describes its skeletal structure, which is tubular, with stars at the tip of each tube. Tubastreae are commonly known as the Sunflower Corals. 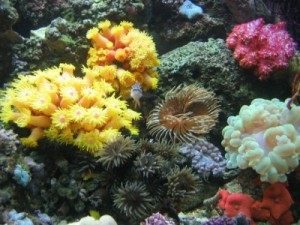 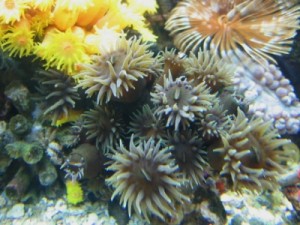 The common name of Orange “Sun” Coral is misleading since this is a coral that should be placed in low to no lighting with a medium current. Also, this coral lacks zooxanthellae, the microorganisms, which turns sunlight into food for corals. In the wild, Tubastrea are found upside down at the entrance of caves because their waters supply a very rich diet of plankton and nutrients.

Due to the lack of zooxanthellae, this coral needs to be fed regularly, such as twice per day, however, it will depend upon the coral. When a coral is hungry or senses food, it will extend its’ feeding tenticles. I feed mine once in the morning and once at night with meaty foods, such as zoo-plankton (small crustaceans and fish larvae), mysis and brine shrimp, chopped seafood and excess pods. You must feed every solitary polyp or else the colony will die from hair algae attacking its’ weakened skeleton. An eyedropper or syringe works well for this purpose. The corals are more likely to feed, when the polyps have opened up at night. 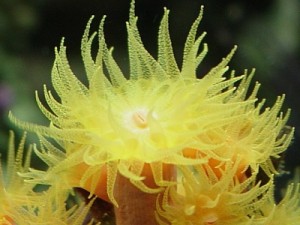 This coral will benefit from the addition of calcium, strontium, and other trace elements weekly to the water. A local fish store owner and I went through a regiment of adding elements and testing and so on until we came up with the correct amount of each element in the tank. I use two capfuls per week of an additive called liquid reactor and 30 minutes after dosing, the calcuim is at 400 ppm, stronium at 20 ppm, and molybendum at 30 ppm. I add one capful of iodine additive each week to keep the level around 25 ppm. The levels of theses chemicals will vary from tank to tank, depending on what is kept in the tank and so on, so your levels may not be the same as mine. Find a good local fish store and see what they suggest for what you are keeping on your reef.

These corals are a bright orange, and may not come out during the day, yet they are still very beautiful when closed. Some may be coaxed into opening earlier by feeding them. This is my new Orange Sun Coral just a few hours after acclimation and placement into the quarantine tank. About 35 minutes before lights off, he is just starting to open up after having been fed. 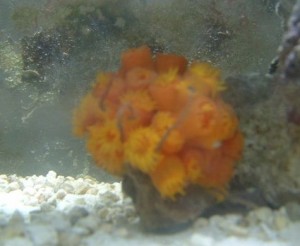 Here he is about 20 minutes after lights off, fully opened. 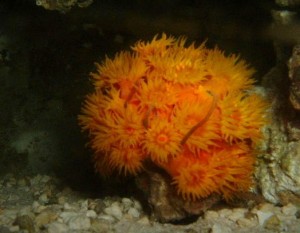 In the aquarium trade, the Orange Sun Coral is usually found in colonies of about 2 inches in size, and they grow to about the size of a fist (5 inches). Tubestrea corals will propagate in aquariums by planulae larvae. Fragging, which is the process of cutting a coral so that you can have more than the one, is not suggested for sun corals. 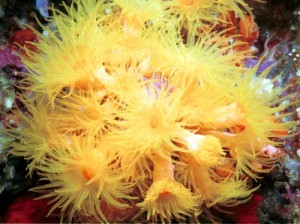 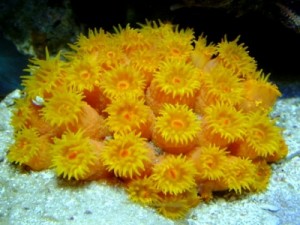 Other yellow/orange corals from the genus Tubestrea that are commonly found in the trade are: T. aurea (Sun Coral) and T. coccinea. Tubestrea micrantha (Black Sun Coral, Black Tube Coral) looks the same, but it is black instead of orange. 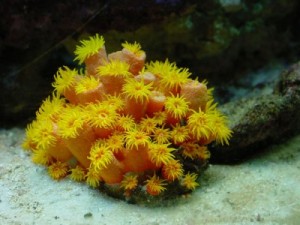 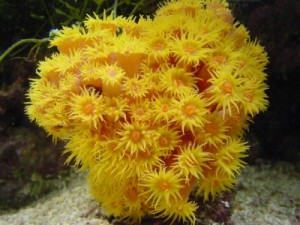 Lastly, a word of warning, common hitchhikers to these corals are parasitic nudibranches or Wentletrap snails. Nudibranches are like a sea slug and are a soft bodied creature that does not have a shell. Not all nudibranches are bad, but they have been found to be difficult to keep in an aquarium. If you do find one in a display, you can always remove it with tweezers. You should always quarantine new purchases so that you can watch for parasites. Do remember to dips all your newly purchased coral from the local LFS to remove all these hitchhikers off the rocks and coral.