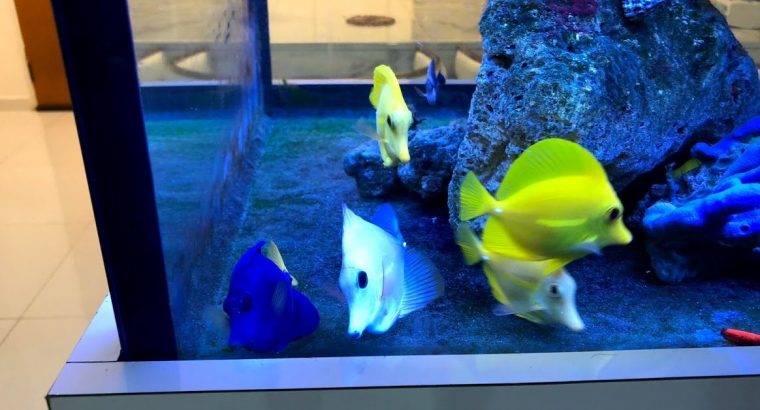 People study other people’s past so they won’t make the same mistake, that is why we call it his story. (Get the puns?… ok fine sorry). Anyway here are the TOP 10 mistakes newbies make when starting up a marine tank.

Number 10: Jumping into the hobby without research.

When people start to get interested in the hobby, some people tend to try to save money on the equipment they use and at the same time, they don’t do any research on what they are buying. Of course, a piece of better quality equipment will definitely be more pricey than a cheaper one. For example, using a cooling fan to chill off the aquarium instead of running a more expensive chiller not knowing that it actually cause issues such as accelerated evaporation and sudden change in salinity which actually cause more work to maintain those level. And due to this, they might actually end up upgrading their equipment and spending more to getting a chiller later on.

Another example for which some people tend to buy fishes or corals without learning their compatibility and care level and finding out later that they cannot take care of it well eventually causing livestock suffering or even death. Which finally, they might find themselves giving up on the hobby or they will finally decide to do some research to learn about it. (We have a SRC forum for you to do your research on!)

Be a responsible reef keeper and know what you are buying and able to care for it before your next purchase!

Another example is the wrong equipment choice (could be a budget-related concern ) but might find himself ended up with terrible equipment choices not suitable for his/her tank system. For Example, getting a cheaper Swing arm hydrometer comparing to a refractometer to measure salinity which is less accurate. Or buying an optical refractometer from online shops without first checking and knowing that it is not meant for other purposes rather than for the saltwater aquarium (eg for beer-making) .

To summaries, selection of equipment base on suitability is more important than solely on prices alone only.

Very understandable – we are all anxious to see our new tanks come to life when we get our new marine tank setup . Well, it is a mistake that was even made by me in the past. We tend to think after spending hundreds of dollars on equipment, it definitely makes keeping marine life easier. WRONG. Tank Cycling is still a must regardless of how much a product says it can cut off its cycling time.

So what can we do to know cycling is done? With water testing, we can be able to test our water to see if the tank cycling process has been completed anot. In that case when ammonia ( NH4) and nitrite (N02) is zero. Your tank is ready to introduce your first guest into your new tank!

Water change is tiring and it could be a huge hassle for some, however as time goes by, nutrients in your tank will build up and elements like calcium, magnesium, trace element and etc will deplete too. The best way to maintain your tank is doing a regular partial water change. Not only do you reduce the nutrient, you also replenish the element that is depleted in the system. You still need to test your water and top up elements that are low.

Number 7: Adding more fishes than your system can handle

Well if you google it will show the Rule of Thumb which means The short “Rule of Thumb” answer generally accepted in the marine aquarium hobby is: “One inch of fish (measured from the nose to the base of the tail) per 5 gallons (20L) of system saltwater. However, it also depends on the species of your fishes and how big is your tank is.

Don’t be afraid to always post online to ask about the care level of that particular fish. As for this article, I’ll recommend to always monitor your ammonia and Nitrite level ( Which is toxic to fish ) as well as your nutrient level ( Mainly Nitrate & Phosphate ).

Having Sandbed in a reef tank is a beautiful addition in a marine tank, however, if you decided to have a sandbed but not taking care of it could actually cause more harm than good. For a shallow sandbed, it is advisable to do some vacuuming to remove any debris or leftover fish food on the sand surface to prevent any debris from building up.

However, if you have a deep sand bed ( DSB ) , it might not be a good thing to stir the sand bed to prevent any disruption to the biological filtration function of it. Alternatively, it is good to have some cleaning crew like the tiger nassarius snails, and sand shifting star etc to helps keep the sandbed clean…

If you ever bought healthy livestock and decided to throw it in the tank thinking everything will be ok, you could be wrong. There could be a great variant of water parameter and temperature differences between the water at the live fish shop store and your tank.

The sudden shift in water parameter if you did not acclimatize your newly bought fish/coral correctly will stress the corals which could result in the death of the newly purchased livestock. Acclimating simple mean adjusting the water parameter for example temperature, PH, and salinity etc of the water between the new and the old to avoid any sudden shift.

This should be done in a slow manner to allow the new fish to adapt to the new water parameter without causing any stress to the new livestock. Be sure to check on the fish compatibility before the introduction of the new livestock, and check out on our detail fish acclimating guide.

Quarantine simply means to isolate all new livestock that has arrived from another location that may have been exposed to infectious or contagious disease/parasites, before introducing it into the current system to prevent any form of diseases spreading to existing healthy fishes in the system.

The quarantine period is typically 2-4 weeks to observe if the newly purchased fish shows any signs of illness or disease and make any treatment if necessary in an isolated tank before introducing it into the main display tank. You can read about setting up a simple Quarantine system here

Fish might appear to be well-fed and actively swimming in a fish shop. Even though it went through quarantine in the fish shop, it is surely a good practice to do our own diligence to do our own quarantine as well to prevent any chance of diseases introduction into our existing system. With a proper quarantine system in place, you will not risk risking your existing healthy livestock when you are adding any new fish or corals.

If you think that you are ONLY adding your new coral into your new system every time you purchase a new coral. You might be WRONG, hitchhiker like coral Pest could be hidden inside your coral without you knowing it, and these hitchhikers could be invisible to our naked eye. These coral pests could also be buried inside the rock that came with it, and the only way you can actually stop them from introducing into your tank is to perform a coral dip.

After performing a corals dip, you will reduce the risk of introducing any form of the coral pest into your system that could have devasting effects.

Number 8: Adding salt directly into your tank without mixing or testing.

Well well, if you happen to make this mistake, that’s something to learn from. Introducing salt directly to an established tank system which might contain an undissolved component which not only giving you a false salinity reading but might cause other sudden parameter shift as well ( Example, sudden calcium, KH, increase ).

Not only that, you might unintentionally raise more salinity, than needed without testing the salinity in the first place. The sudden increase in salinity could have a serious effect on the livestock in your system. So be sure to always mix it separately in a pail first, and testing the salinity after all salt is fully dissolved before trying to increase the salinity of your existing system.

Number 9: Not performing regular water testing on your water parameter.

Wow, my corals are so beautifully open and fishes are eating aggressively (too hungry?) Joke aside. Doesn’t it really mean that everything in the tank is good? If you decided not to perform your regular water parameter testing regularly and dosing and topping up the elements blindly, you might actually find yourself overdosing certain elements and causing harm to your livestock then actually helping it.

Without performing a regular water testing, you will not be able to tell and replenish any loss or drop of the element to the optimal level for a thriving reef tank to be healthy. Take my advice and schedule to do a regular test . Let us have a beautiful marine tank.

I believe many new reefers has suffered this mistake of happily buying a beautiful fish during one of the trips to a local LFS before making any research or asking the store owner about its care requirement. Which for an example is the bicolour dottyback.

As beautiful it is like a royal gramma, however, due to the fish behaviour nature, once introduced into your tank, it’s aggressive nature may attack any smaller or weaker fish that comes to its path which causing it to die. What is next? New fish lose their appetite and die from stress? From broken fins to death?

As previously mentioned, always Always ALWAYS research on the species before purchasing. Get the smaller to bigger fish so it won’t bully the bigger one when introducing the latter. And ya avoid buying a fish if you do not know it feeding requirement and behaviour.

Thank you all for reading my articles. If you want more, hit the like button. If there are any more articles you want me to write about, comment down below!

Starting your first marine tank. Overview to plan your equipment and budget (Part 2)

Starting your first marine tank. Overview to plan your equipment and budget (Part 1)